Arterial Spin Labeling (ASL) MRI is a non-invasive method for the quantification of perfusion. Analysis of ASL data typically requires the inversion of a kinetic model of label inflow along with a separate calculation of the equilibrium magnetization of arterial blood. The BASIL toolbox provides a means to do this based on Bayeisan inference principles. The method was orginally developed for multi delay (inversion time) data where it can be used to greatest effect, but is also sufficiently fleixble to deal with the widely used single delay form of acquisition.

If you have resting ASL data with only a single inversion time then you can still use the tools in BASIL for perfusion quantification. If you want to perform analysis of a functional experiment with ASL data, i.e. one where you want to use a GLM, then you should consult the perfusion section of FEAT, or if you have dual-echo (combined BOLD and ASL) data then consult FABBER.

For single delay ASL data kinetic model inversion is realtively trivial and solutions to the standard model have been described int he literature. However, it is becoming increasingly common to aquire ASL data at multiple times post-inversion and fit the resultant data to a kinetic curve model. This permits problems in perfusion estimation associated with variable bolus arrival time to be avoided, since this becomes a paramter of the model whose value is determined from the data. Commonly the model fitting will be performed with a least squares technique providing parameter estimates, e.g. perfusion and bolus arrival time. In contrast to this BASIL uses a (fast) Bayesian inference method for the model inversion, this provides a number of advantages:

While the first two apply specfically to the case of mulitple delay data, the latter are also applicable to single delay ASL and are only available using the Bayesian technique employed by BASIL.

The latest version of the BASIL tools are now included in FSL 6.0.1 (and higher) and we strongly recommend upgrading to this if you have been using an older version.

The new version includes an improved GUI, along with a range of other improvements. 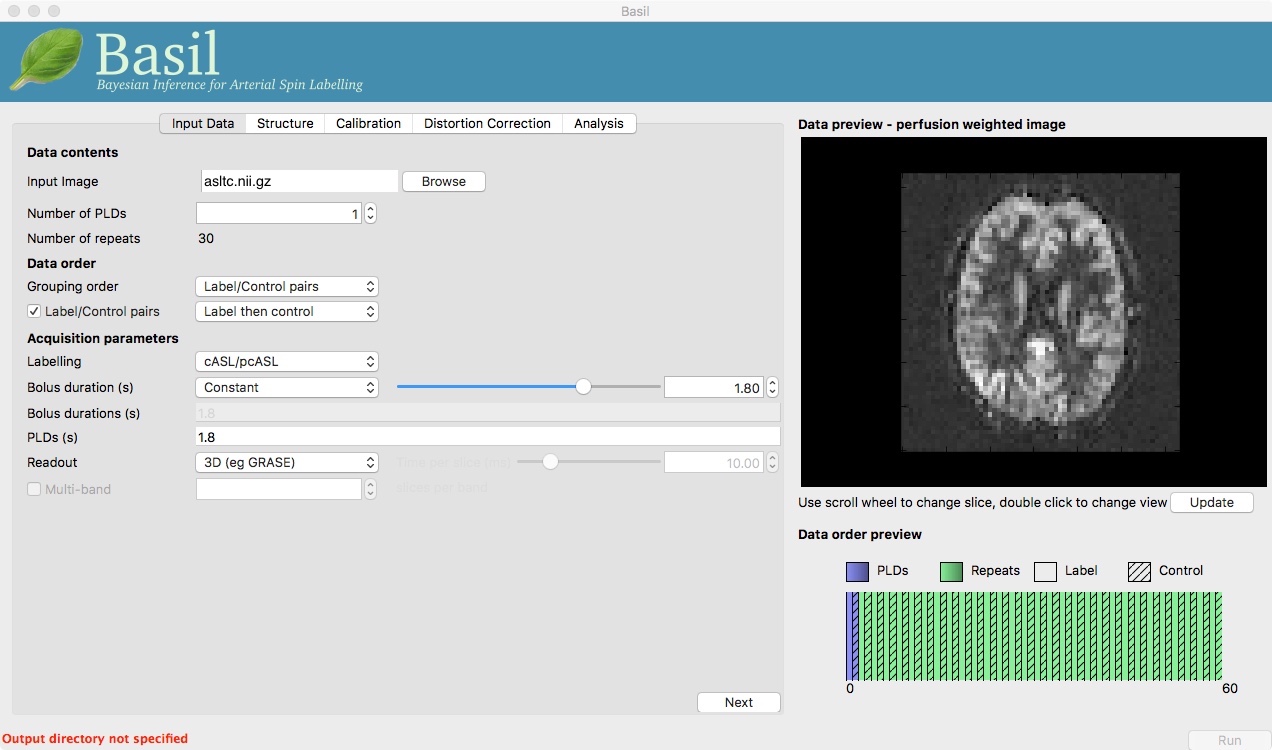 Fully updated documentation can be found via the link below.

An extensive set of examples of the use of BASIL (for pcASL) is available as part of the ASL primer. They are freely available via the www.neuroimagingprimers.org website, you can link to them directly here.

Further examples (for other tools within BASIL and more advanced command line usage) can be found via the documentation.

BASIL is supplemented by a collection of tools that aid in the creation of quantitative CBF images from ASL data, you should either use one of the higher-level analysis packages or if you want a more specific analysis select the appropriate tool(s) for the data you have.

Higher-level packages, these provide a single means to quantify CBF from ASL data, including kinetic-model inversion, absolute quantification via a calibration image and registration of the data. This will generally be the first place to go for most people who want to do processing of ASL data.

If you employ BASIL in your research please reference the article below, plus any others that specifically relate to the analysis you have performed:

If you employ spatial priors you should ideally reference this article too.

If you fit the macrovascular (arterial) contribution you should reference this article too.

If you employ the partial volume correction method then you should reference this article too.

If you perform model-based analysis of QUASAR ASL data then you should reference this article too.