Permutation tests are computationally intensive. For small, non-imaging datasets, recomputing a model thousands of times is seldom a problem, but for large, complex models this can be prohibitively slow, even with the availability of inexpensive computing power. PALM offers the possibility of accelerating the inference through properties of statistics used with the general linear model (GLM) and their distributions, in a way that is irrespective of software or hardware improvements.

In the table, CMV stands for Classical Multivariate Tests (such as MANOVA, MANCOVA, CCA), whereas NPC stands for Non-Parametric Combination. See here for details.

This method consists of simply choosing a small number of permutations, e.g., less than 1000. To run, use:

This method consists of running as many permutations as needed until a fixed, pre-defined number of exceedances is found. An exceedance is an event in which the statistic after permutation is larger or equal than in the unpermuted case. The procedure continues until all possible permutations have been exhausted, or until a very large limit is reached. To run, use:

If the number of exceedances is omitted, the default is 2. The number of permutations to keep trying can be indicated with the option -n, but in this case, it would be a large number. For example:

This method consists of running a number of permutations, then fitting a Generalised Pareto Distribution (GPD) to the tail of the distribution. The p-values are computed from the GPD. To run, use:

The number of permutations used to build the initial null distribution is controlled by the option -n:

For large datasets, or for a large number of permutations, this method can be memory intensive for uncorrected and for FDR corrected p-values. In these cases, consider using the option -nouncorrected:

This method consists of first computing analytically the first three moments of the permutation distribution of test statistics that can be written in the form trace(AW), where A = X*pinv(X), W = UU', USV = svd(RY), R = I-Z*pinv(Z), and I is the identity matrix of size N, where N is the number of subjects. Once the moments have been estimated, gamma distribution (also known as Pearson type III distribution) with same moments is used to calculate the p-values. Differently than all other methods, permutations are not actually performed, yet the p-values are based on permutations. To run, use:

This method cannot be used in cases in which only sign-flippings would be used (-ise), nor with exchangeability blocks or variance groups, and cannot be used to test the intercept (i.e., the intercept must be entirely contained in the set of nuisance variables, but not among the variables of interest). The test can be used when the distribution of the errors is symmetric as a replacement to permutations.

The number of permutations used to build the initial null distribution is controlled by the option -n:

As with the tail approximation, for large datasets, or for a large number of permutations, this method can also be memory intensive for uncorrected and for FDR corrected p-values. In these cases, consider using the option -nouncorrected:

This method consists of running a small number of permutations (call this number J0), then for the subsequent permutations, use only a subset containing a small number V0 of voxels. This subset is chosen randomly. The remaining voxels that are not tested have their exact test statistic computed from the others using low rank matrix completion theory. For this method, both J0 and V0 must be larger or equal than N(N+1)/2. To run, use:

where val is either:

The default val is NaN, indicating that PALM will compute it from the sample size as V0 = N*(N+1)/2. The overall number of permutations (fully sampled plus the ones with values filled in) can be specified with the option -n as usual.

Gains in speed with low rank matrix completion are noticeable only for large images and small number of subjects. Otherwise, the other methods above tend to be faster.

From all the methods, the one that is the most general, applicable to a wider variety of situations, including corrected and uncorrected p-values, spatial and multivariate statistics (classical and NPC), and which also showed overall a good performance and a good tradeoff with resampling risk is the tail approximation, and this method is recommended generally. Other methods can also be considered in a variety of scenarios.

The flow chart below gives overall guidance on which method to use in particular applications. 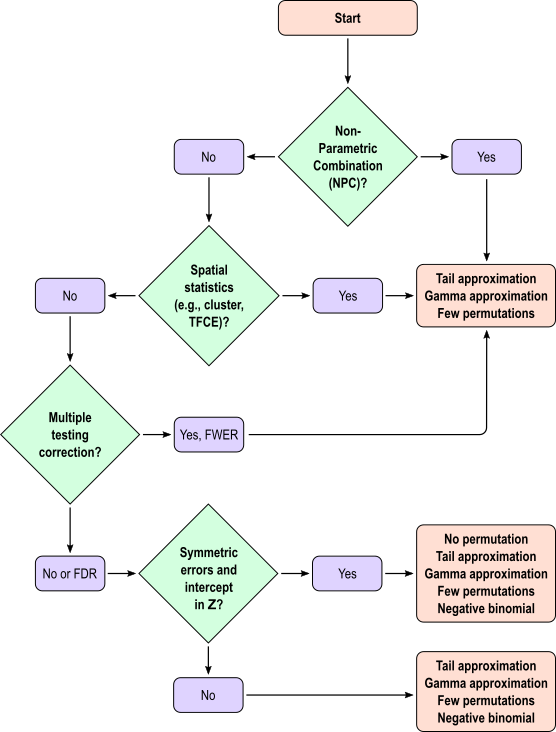 The tail and gamma approximation can take one extra argument called "out":

The reference for the accelerated permutation tests is:

The main general reference for PALM is the same as for randomise:

For NPC, CMV assessed with permutations, and for correction over contrasts and/or modalities (options -corrcon and -corrmod), the reference is: