The Non-Parametric Combination (NPC) is a way to perform joint inference on multiple data collected on the same experimental units (e.g., same subjects), with minimal assumptions. The NPC consists of, in a first phase, testing each hypothesis separately using permutations that are performed synchronously across datasets; these tests are termed partial tests. The resulting statistics for each and every permutation are recorded, allowing an estimate of the complete empirical null distribution to be constructed for each one. In a second phase, the empirical p-values for each statistic are combined, for each permutation, into a joint statistic. As such a combined joint statistic is produced from the previous permutations, an estimate of its empirical distribution function is immediately known, and so is the p-value of the joint test.

As originally proposed, NPC cannot feasibly be used in brain imaging. As the statistics for all partial tests for all permutations need to be recorded, an enormous amount of space for data storage is necessary. Even if storage space were not a problem, the discreteness of the p-values for the partial tests is problematic when correcting for multiple testing, because with thousands of tests in an image, ties are likely to occur, further causing ties among the combined statistics, causing the test to be not powerful (although still valid). The most obvious workaround -- run an ever larger number of permutations to break the ties -- may not be possible for small sample sizes, or when possible, requires correspondingly larger data storage.

The solution is to use a modified version of the NPC, starting from the principles that underlie direct combination of statistics, by computing for each partial test quantities that behave similarly as p-values; we call these as "u-values", to emphasise that they are not meant to be read or interpreted as p-values, but rather as transitional values that allow combinations that otherwise would not be possible. The algorithm proceeds then in single phase, with permutations being performed on-the-fly, and with no need for storage of the complete permutation distribution at each voxel. Another modification needed for brain imaging refers to spatial statistics: the asymptotic distribution of the combined statistic is used, this time to produce a z-score, from which cluster extent, cluster mass, and TFCE can be computed. A flow chart showing both the original and the modified algorithm is shown below. 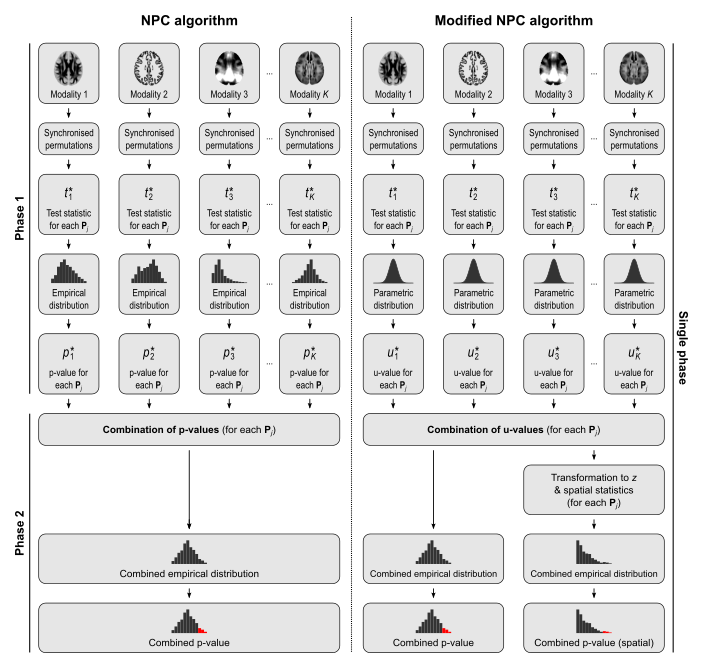 The rejection region for the joint null hypothesis depends on how the combined statistic is produced. Various combining functions can be considered. Some of these were developed for applications such as meta-analyses. The figure below shows the rejection regions for four different popular combining functions, i.e., the ones attributed to Tippett, Fisher, Stouffer, and Mudholkar-George, and considering two partial tests, for which p-values (p1 and p2) are available.

In the NPC, these combining functions can be used even if the partial tests are not independent, as their dependence structure, whatever it might be, is implicitly accounted for during by synchronised permutation procedure.

Another situation arises if there is no a priori direction suspected for an effect, but concordant directions for the partial tests (either direction) are more relevant than mismatching. The rejection regions for these four examples of combining functions would then be as in the figure below:

It might also be the case that both directions are equally interesting for each of the partial test. If that is the case, a two-tailed test for each partial test is ideal, and the rejection region for these four examples would be as below:

One of the many reasons for the superiority of NPC when compared to classical multivariate tests, such as MANCOVA, refers to its finite sample consistency, that is, even with fixed sample size, as the number of modalities being combined increases, the power of the test also increases, as shown in the simulations in the reference below. The power of MANCOVA, however, increases up to a certain point, then begins to decrease, eventually reaching zero when the number of combining variables match the sample size.

Running it in PALM is simple:

Note that the options -concordant and -twotail cannot be used simultaneously, otherwise the combined test becomes inadmissible, and an error will be printed. See the reference below for details.

The option -npc (no parameters) is a shortcut to the options "-npcmethod <default method> -npcmod". The default method is Fisher.

The options -corrmod and -corrcon, to correct across modalities and contrasts, can be used with NPC.

To run a MANOVA/MANCOVA design, computing the p-values through permutations:

The option -designperinput cannot be used together with -mv, as all inputs are used with each design. The option -corrcon, to correct across contrasts, can be used.

The methods used in PALM to handle joint inference (NPC and classical multivariate) are described in:

The general reference for the permutation tests used in PALM is the same as for randomise: